We believe in community, and that means we'd love to chat!

As consumers in the western culture, many of us dedicate one month out of twelve to really focus on others. We turn our hearts and minds toward charity by entering the whirlwind of gift-giving centered around the commercialized image and nature of Santa Claus. Amid our Christmas charity efforts, we can forget the significance of this season and how a kind person’s sincere secret acts of generosity gave us one of the most iconic images of gift-giving known worldwide.

The legend of St. Nicholas has been around since the 4th century, and according to history and folklore, he lived in Mayra, modern-day Turkey. Nicholas was born to a wealthy family and, as their only child, inherited everything after the death of his parents. Nicholas became a Catholic Bishop and derived the reputation of secretly giving gifts to people in need and helping the poor, according to Rett Nelson of East Idaho news. His most memorable act of charity is when he single handily prevented two sisters from being sold into prostitution by their father when he gave each of them a dowry to be married. The story goes that Nicholas climbs the man’s roof and drops a bag of gold coins down his chimney as a dowery for each of his daughters. His humanitarian efforts and empathy for the downtrodden earned him the title of Saint Nicholas, the Patron Saint of Children.

Over the years in American culture, Saint Nicholas’s reputation evolved into Santa Claus in the 1800s, when a New York newspaper reported that a group of Dutch families gathered together to honor the death of St. Nicholas. The article grew in popularity, and the Dutch families, referred to St. Nicholas by his Dutch nickname Sinter Klaa. Then in 1809, an author by the name of Washington Irving provided us with the idyllic image of the red-coated Santa Claus on a rooftop delivering gifts to people; in his book, The History of New York, says Rett Nelson. Sadly, we rarely see the images of a compassionate Catholic Bishop helping people in need or The Santa Claus of the Salvation Army during the 1890s raising money to pay for free Christmas meals to needy families. Instead, we are bombarded with the commercialized propaganda image of Santa Claus urging individuals to acquire more stuff for self-aggrandizement. 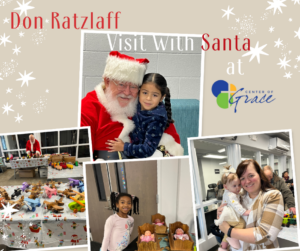 Although here at the Center of Grace, a modern-day individual embodies the spirit of St. Nicholas and symbolizes the heart of Santa Claus. Don Ratzlaff has shared his timeless talent of shaping wood into beautiful gifts for the Center of Grace through the Visit with Santa event for more than a decade. The Center is exceptionally grateful for Don’s dedication, commitment, and generosity. Don truly personifies the essence of Saint Nicholas by giving out the wealth of his talent and charity of heart. He purchases wood and works 343 days of the year crafting wooden trucks, planes, cars, baby doll beds, jewelry boxes, and toy blocks by hand to give to children in need during the Christmas season for free. His generosity shines through as he allows his white beard to grow long and adorns the idyllic red Santa Claus attire to immortalize each child’s smile in a picture with their beloved Santa. This year’s Visit with Santa event was one of the best years on record. Don Ratzlaff was able to gift more than 130 wooden toys to children.

Would you consider becoming a monthly supporter with a gift large or small?

Your gift will help the Center of Grace continue to create beautiful moments like these all year? Please click the link below to provide an individual donation, or if you are a business, consider making a year-end contribution to the Center of Grace.

Center of Grace Donation at PushPay